One of the most important European manufacturers in the field of flexible packaging with aluminium foil. 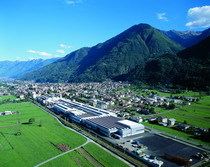 Carcano is one of the most important European manufacturers in the field of flexible packaging with aluminium foil for various market sectors (confectionery, food and pharmaceutical industries etc…). Carcano also operates in many technological fields, in particular in cable screening, insulation and soundproofing, and decorative trims.

The excellence of its product is founded on in-house manufacture of aluminium foil resulting in the highest levels of quality, performance and dimensional characteristics. But it is also the fruit of experience and roots in the region which started as far back as 1896 (date of establishment of the business in Mandello). It is also important to mention the new rolling mill “STELVIO 2” for widths up to 2050 mm, which was installed in April 2007.

Carcano Antonio S.p.a. does not certainly show its more than 100 years of life, except in the richness of its experience and in the prestige acquired on the international market. Dynamism and vitality, which result in a constant transformation, are part of its genetic background.


Since 1896, when the founder Antonio Carcano decided to move his business from Maslianico to Mandello del Lario, Carcano has been continuously evolving, anticipating and facing in a solid and tangible way the changes dictated by time. After an initial production activity involving flexible tubes in a tin and lead alloy, Antonio Carcano understood the great possibilities tin foil had in the field of flexible packaging, in particular in confectionery.
In the 1920s aluminium replaced tin in the flexible packaging industry, but Carcano was not unprepared: it modified and adapted its technologies and designed and built machinery for the new processes. The technological, organizational and productive development continued and after World War II, Carcano implemented the necessary expansion of the foil rolling activity. The Delebio plant, dedicated to foil rolling, was opened in 1947. The plant exploits hydroelectric energy which is self-produced thanks to a basin and a power plant specially built.

At the Delebio plant, rolling mills and auxiliary plants have become more and more sophisticated, large and fast. The converting lines in Mandello have been enriched with state-of-the-art machines for printing, colouring and for other processes. The Delebio plant was the second plant in the world to install a rolling mill for thin foil in a finished width of more than two meters, and it was the first plant ever to carry out the whole thin foil production cycle, starting from slab casting, in the above mentioned widths. Delebio has a leading position, not only in Italy, but also in the world market, in the production of a high quality thin foil, and the same is true also for Mandello in the field of converted foil (printed, coloured, laminated, embossed etc…).

More than 550 employees (265 of them working in Delebio and 290 in Mandello, where besides the factory there are also the offices and the headquarters), a foil production of 36.000 tons/year, 10.000 of which converted at the Mandello plant, a turnover of more than 160 million Euros: these are some data which identify Carcano today. A “provincial” company open to the world: more than 55% of its production is exported and reaches the furthest corners of the globe.